So, as many of you know we launched our first campaign last week. It was a failure in terms of ROI, however we did get some interesting stats out of it, and some even more interesting keywords.

I won’t tell you what niche it was, just incase I decide to start running the campaign again later on, but I will show you the stats that we determined.

So, how did it work out?

And the other network I tested

My CTR’s are relatively high on the landing pages, but nobody was buying. This led me back to refine my keywords and also modify some of the ads.

Here’s a screenshot of what P202 saw coming in for clicks:

Here’s a screenshot of what Yahoo sent me in clicks: 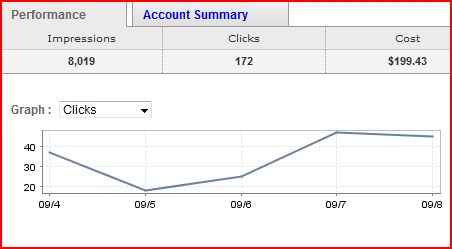 Here’s a screenshot of the clicks from my LP to the offer.

And finally, here’s the overall impressions and clicks from YSM.

So, what did I learn from all of this?

First, Adbrite probably isn’t the best place for PPC is probably the biggest thing I learned.

Second, I learned that instead of starting out with 25 keywords, I should have had about 500 of them, super long tail, to match my shit. Oh well, live and learn I guess.

Third, I learned that I shouldn’t over complexify my landing pages, and tracking. Keeping it simple makes things far easier to assess. Next time only 2 landing pages, without multiple offers.

Fourth, I learned that I shouldn’t have accidentally left the yahoo content network on as this led to shitloads of horrible clicks right away.

Fifth, I learned that I should have more than 5 ads to test click through ratios.

Sixth, I learned that I probably shouldn’t drop so much money on testing when I’m so broke.

Overall though, it was a great experience, and taught me a helluva lot about PPC and what to do. It just goes to show that actually taking the time to just fucking do it, instead of talking about it or reading about it teaches you much more than you can ever learn from reading.

I’m excited to launch my next campaign this week and see how well it fairs with what I’ve learned from this experience.

Anyone else have any other tips or tricks they’d like to share? I’d love to hear them in the comments, so get off your ass and do something!