As many of you know, I’ve been researching wallets for about a month now. My old wallet was dying, and got even worse at ASE 2009. I needed a new wallet bad. I didn’t want to just go buy something because every wallet I’ve ever had in the past would be destroyed within 1 to 2 years so I wanted something that would last longer, and was much thinner than a regular wallet.

During my research, I came across All-Ett bill folds a number of times. Every review I found, every site recommending wallets all had these wallets on their site, and were receiving great reviews. I was skeptical because of a name I’d never heard of, and because hearing all these reviews saying they’re so great, and no downfalls is usually unheard of for a product. Somebody out there has to have a negative review I thought.

I was wrong. So wrong.

I couldn’t find a single thing that discussed these wallets in a negative manner. I really couldn’t believe it, but they are cheap wallets so I eventually caved in and decided to order one for myself.

The wallet I ordered was the simple model, with the ID window, and two separate areas for bills and receipts.

The claim to fame of these wallets is the thinness of them, and how easily they slip into your pocket. Especially with many people wearing tighter fitting clothes these days and putting their wallet in their front pocket. We need something that’s much thinner than regular wallets, and won’t cause a big bulge in your pocket that looks bad.

Another cool thing about this particular wallet is the material it’s made from. It’s made from a fabric called Spinnaker. This material is a tightly woven polyester PU coated fabric. It’s super super light, but super durable, and also water repellent. If you’re familiar with sailing this is what many sails are made from, because of the light weight and durability. If you don’t like this kind of fabric, All-Ett also makes leather versions of their wallets so you can stick with the tried and true.

I opted for the spinnaker fabric because I wanted light weight, and something that was resistant to tearing as well as water. I know I have issues with dropping things near water, whether it be into drinks at clubs or up at my cottage so this was the best choice for myself.

The only downfall of this particular fabric is it makes a little bit of a “Crinkling paper” noise when you open and shut the wallet. But, this goes away fairly quickly (I’ve already noticed a significant decrease in the noise after just 2 weeks of use). If you’re opening the wallet in anywhere that’s somewhat noisy, you probably won’t even notice the noise it makes.

Now, you’re probably wondering why is this the best wallet for affiliate marketers? Well, let me tell you.

It’s quite simple really, this is a super thin wallet, with many versions available including international versions, travel versions, passport capable versions etc. With many of us being travelers, these wallets are a perfect match for us.

Not to mention, that these wallets force you to be super organized. There are only a few slots available for your cards and ID and whatnot, so you won’t carry around a bunch of cards that are never used. This is the ideal way to get rid of that “Female Body Inspector” card you’ve been lugging around since you were 10 years old because it’s funny.

About two weeks ago, I received my order in the thinnest envelope I’ve ever had shipped to me with something inside of it.

Here are some pictures of it. 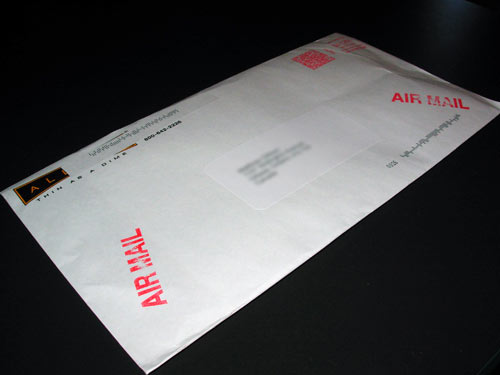 I was totally surprised at the envelope. Did they really ship me something? 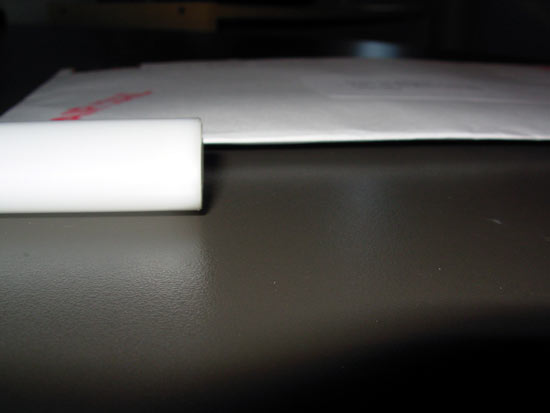 Yup, that’s a lighter next to the envelope. Isn’t that nuts? 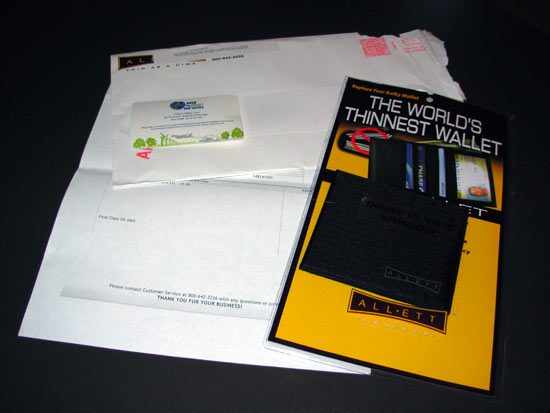 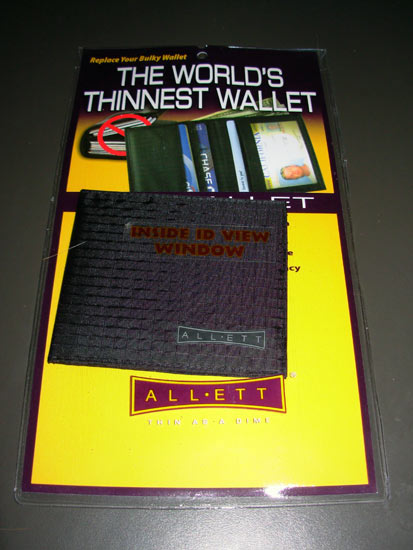 Here’s a shot of just the packaging, and the wallet itself. Pretty cool eh? It’s not overdone with logos and sparkly shit like a lot of other wallets are. Getting excited to try it out. 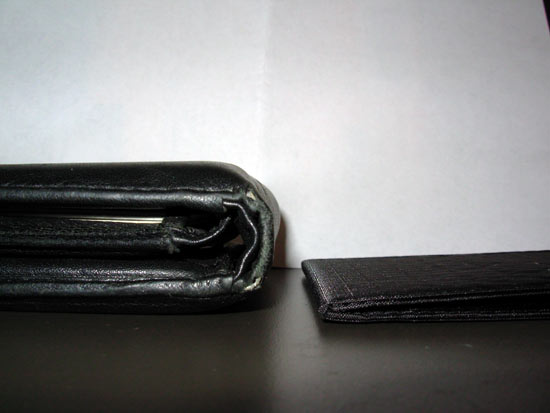 Wow. Look at the difference in size. Mind you, this is my old wallet full of stuff, and the new wallet completely empty. But, check this out. 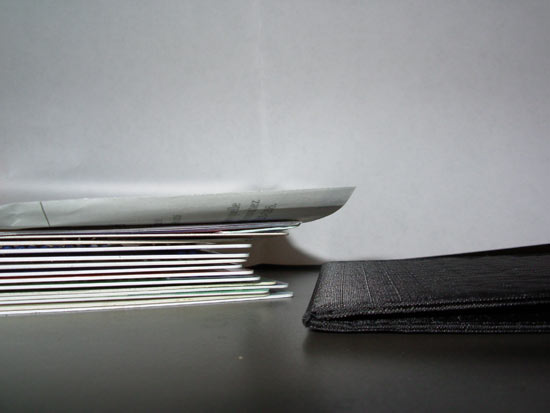 That’s a lot of stuff coming out of the old wallet. Lets see what it looks like once we get it into the All-Ett wallet. 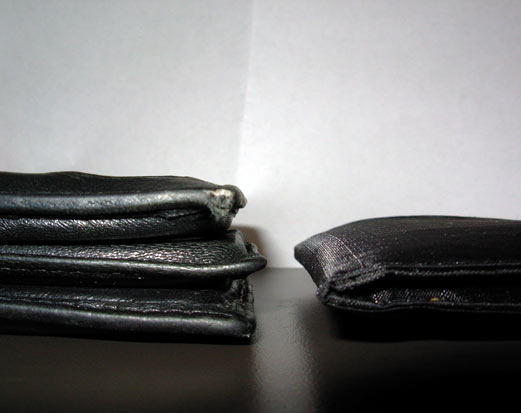 So, as you can see from the photo comparisons. The All-Ett wallet really is the worlds thinnest wallet and will carry all your cards, money and receipts snugly in your front pocket. No more back pain, or large bulge in the front or back of your pants. Plus, there’s no more need to worry about pulling out a leather wallet on rainy days, or that the leather might rip or something like that.

I have been recommending these wallets to all my friends since I got it, and 3 of them have actually purchased it and I’ll probably be picking up 3 or 4 more for Christmas because I know a bunch of people that need thinner wallets.

I don’t usually do product reviews, but I had to say something about this one from All-Ett Wallets because it really is a superior wallet that affiliate marketers will love.

Let me know in the comments if you use one too, and what you think of it.

I own 3 of their wallets and actually have mixed reviews..

the one you show here was the first i purchased and I loved it for many weeks. Unfortunately, the stitching ripped apart, and for a $10 item I am not going to take the time and try to get a replacement.

Next I bought the leather one which looks a little nicer and it was very good. However, durability again was an issue with the stitching and I have switched back to a Coach money clip non-folding wallet.

I also purchased the All-Ett passport holder and this one I like alot. Since i am not opening and and shoving it in my pocket all day, it has not suffered from durability issues at all. I keep it in my laptop bag and it is great for holding lots of Hotel and Air miles cards and all the junk I don’t need in my everyday wallet, but do need for travel.

My next try might be these super thin stainless steel (fabric though) wallets I have seen, but they are more pricey so I am not ready to take the plunge yet.. http://www.hammacher.com/Product/75815

let us know how the fabric all-ett holds up after 6-8 months.

Interesting. Nice to hear back from another owner already. I haven’t noticed any problems with mine yet, but it’s only been a few weeks. It’s so far working great.

I hear you on the passport holder, I think I’ll be getting that one next for some trips I have planned. I saw that stainless steel one too, it’s interesting but pretty pricy, there’s also these “high end” wallets too http://www.braithwaitewallets.com/, not stainless but pretty good looking design, and endorsed by Neil Patrick Harris. heh.

Be nice if there was a “comment reminder” to remind me to repost here in 6-8 months, I’ll do my best to remember though – If there are any problems I’ll be sure to post about it anyway.

I purchased the one like yours but with leather–but its only on the outside. The “crinkly” sound stayed omnipresent as I shifted position and the pressure on the wallet changed. The stitching unraveled inside. The compartments are too loose to keep cards from spilling (annoying when you open it in a hurry to pay for something) and it requires me to lift everything out to reach one specific card (another annoyance.) No, thank you–I’ll keep my leather billfold and purge it occasionally of accumulated excess! Besides, I’ve been told my All-ett is very nerdy! :-0

Interesting, I don’t see what the issue is with the crinkly sound. It really doesn’t bother me, and it seemed to help putting it in the dryer on low heat, I barely notice it now. Mind you I’m not in and out of my wallet a bunch of times a day, maybe 2 or 3. I also don’t have the issue with the cards slipping out – but I have 3 cards in each slot, and a bunch of business cards as well so that keeps everything nice and snug. I have mine setup so my three most frequently used cards are on the left, and the one I use most frequently is upfront, so it’s nice and easy to grab them. I also can’t comment about back pocket usage, I always keep my wallets in my front pocket. Thanks for the comment 🙂

My wallet is smaller than yours! Coach non-money clip wallet. GF bought it… and I will NEVER go back to a ’normal’ wallet.

I’ve had my original world’s thinnest wallet for 4 or 5 years, and have just now had a hole worn into the corner of one pocket. Very happy with both size and durability, and now predict I will never be able to own a wallet of any other design, as I can’t imagine ever havinganything thicker between my ass and my seat cushion.