We’ve all been there. Struck by a moment of ambition and creativity. A new application, tool or website idea has popped into our heads and we have nowhere to write it down to remember our idea. Except for maybe the closest napkin or piece of scrap paper. This of course opens up the possibility to losing the paper, or accidentally throwing it out or whatever.

Whether we like to admit it or not, this is a common problem among many entrepreneurs – many of us have ADD, and we’re serial entrepreneurs. We have about 100 ideas at all times and want to get something out as quick as possible, and communicate it effectively.

You may have heard of this application a year or so ago when it was highlighted on Digg and Slashdot. I had too, but honestly never took the time to download it and test it out myself. I probably should have though.

In case you’re not familiar with the application, at the simplest level relates back to my Just Fucking Do It post about getting things done. This application lets you rough out your ideas super quickly, and efficiently with their pre-developed set of graphical elements to toss into your sketch.

Here’s the introduction video, which can probably explain it much quicker and more eloquently than I ever could.

What’s really cool about this application, similar to mind mapping, it lets you get your ideas out and into digital format at almost the same speed of regular pen and paper. If you’re like me, you know that using a pen and paper is the quickest way to get your ideas out but almost always ends up with a messy sheet of paper, with a bunch of things crossed out or erased and updated ideas inserted. Using Balsamiq avoids this because everything is digital so you can actually delete items and just replace them. Much like a word processor, except for your application/website/whatever ideas.

I’m planning some applications with a few groups and have been testing out this software for them over the past few days. It’s working great however I do still notice that it’s “software” and not “pen and paper”, but this is probably just something that has stuck in my head for nearly 30 years and won’t take long to get over. I imagine it would be even better if I had a tablet pc, however I don’t so I can’t comment on that.The software is definitely saving me time, and allowing me to communicate my ideas much easier than before. I tend to think fast, and the “curse of knowledge” affects me and I think that others also understand the same things I do – even if they aren’t geeks – this software helps me keep things simple and explain my ideas visually which really really helps me with my work.

I also really enjoy that it looks.. like a drawing you’d create on a napkin. Here, take a look at this screen shot for an example;

I think this approach, keeping things simple I mean, makes this application all the better. I’ve seen other mind mapping tools like this, but they try and make everything look fancy which in my opinion makes the application harder to use, and won’t allow your brain to get past the “it’s gotta be perfect” mentality and instead into the “lets just get this shit done so we can finalize it and get it out there” mentality.

Side Note: While thinking about this post, I thought I should mention one of the mind mapping application I do like, which is slightly different than a thumbnail sketcher but along the same lines for the creative thinking aspect, is Mindjet – but that’s a whole other article in itself.

Another thing that’s pretty cool about this thumbnail sketching software, especially for me when designing landing pages or site templates is the napkee extension that’s available to take your Balsamiq creation, and export it as a html/css page. This lets me quickly map something out, even if I’m on the phone, and then quickly upload it for a client to check out – saves me lots of time, or scanning in my hand drawn notes (and often converting them in illustrator because they’re so messy). Saving time, is saving money which you can never go wrong with. 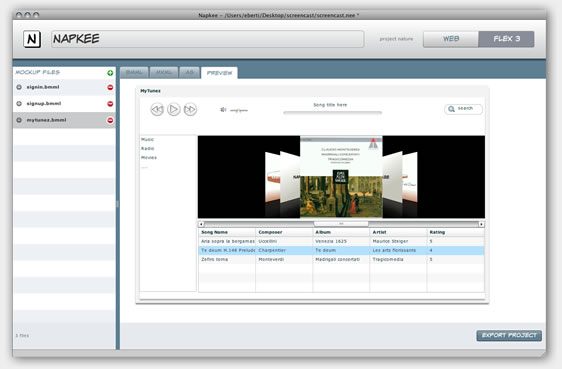 I know these applications cost some coin, but I like to think of it this way, when I go ahead and drop the $49 on Napkee, and 79$ on Balsamiq, this is $128. Which, in my case depending on the client is about 2 hours worth of my “time billed”. Not to mention the time it saves me for my personal affiliate/internet marketing ventures that I am creating. So, saying this saves me 30 minutes in the roughing out process of every application or idea I have, that only means 4 ideas and I essentially have my money back for the expense of this product.

No, I am not an affiliate of theirs, I’m not being paid to write this post. I just wanted to show you guys other areas you can save huge amounts of time besides the automation or scripting you’re already doing. The more you streamline your whole operation, the more time you’ll have laying on the beaches of Thailand.

Thanks Balsamiq for the review copy that made this post possible and for indirectly cleaning up my desk and wallet!

Balsamiq is cool, but I prefer Thouzand Island.

haha. Damn you. I actually googled for a couple minutes thinking “neat, I hadn’t heard of this application” and then the salad dressing reference kicked in.