As I mentioned in my previous post, we decided to head up to the cottage this weekend. It was supposed to be a really nice weekend, so why not eh. So, Friday we set out from Ottawa to head up to the cottage, and got there around 7:00 PM on friday night. Nothing too eventful that evening. We just hung around with my parents, had a few drinks and talked about nothing in particular. One kind of interesting thing, was my dad brought an envelope up that had come to his house out in Cumberland, where I used to live. It had writing on it, but a return address of the Darwin Awards Publisher. Weird. So. I open it up, and it includes a nice hand typed letter from the publisher, a few bookmarks and some postcards featuring some of the more famous darwin award winners, and candidates.

So I rack my brain to think of where this came from, and then I remember that when I was like 18 or 19 I had sent away a S.A.S.E. to the Darwin Awards to get some free stickers, postcards and bookmarks. It just happened to take around 9 or 10 years to get to me! The hand typed letter appologized for this fact. Apparently my letter was swept under some debris in their office, and it was just found last week. Anyways, props to them for actually sending me some free stuff after all this time 🙂 So that was our friday night. Nothing too exciting, but fun none the less.

After my parents went to bed we stayed up a bit longer to watch two movies. We watched American Gun and Jet Li’s Fearless.

American Gun was a very impressive movie. It’s a flick about a school shooting in the states, but it shows what the police officers life after he helped save the kids, the mother of one of the shooters (and his brother), and various other people. It was sort of like “crash – 2006” except it wasn’t about racism, but more about the abundance of gun violence in the USA and where it comes from, and how it effects people on both sides of the spectrum. Considering what this world is going through right now, it was a very good movie, and had lots to say. They could have made it a bit longer, but I think that ending it without tying up all the loose ends and making us think was probably the better route. Highly recommended to anyone who’s interested in current politics and world views.

The second movie – jet li’s fearless – wasn’t really worth me even writing about it. Pretty boring. The fight scenes weren’t all that great either. It’s a good thing this is his last movie with kung fu (wushu) in it. He’s been overshadowed by Tony Jaa now anyways.

Saturday is where things started to get interesting..

My dad, always the crazy guy at the party, decided they needed a new sound system for the cottage. So, he went out to Future Shop, and bought what I assume is the most expensive BOSE stereo he could find. This thing has it all, 5.1 surround, cd recording abilities, categories, fancy titles on the screen. Wireless satellite speakers for the rear, all the capabilities for pretty much any device he’ll ever be adding to his theatre setup and to top it off a universal remote control that actually worked right out of the box with all his devices.

So, needless to say, as my dad isn’t very technically adept, he had me set that system up for him while Lindsay made a crazy Indian dinner for us (naan, beef vindloo, matar paneer, butter chicken, papadoms, samosas, basmati rice). By the time dinner was made, we were enjoying his brand new stereo system at the same time. All in all it was a great day, lots of talking and getting things done around the cottage for my parents. I enjoy helping them out since they’ve done so much for me throughout my life.

So, that was Saturday. We didn’t do much more that night though we did watch a pretty excellent movie – OSS 117 – it’s a French (Paris French, not Quebec) spoof movie of the James Bond genre. It was really well done and quite funny in my opinion. Lots of little jokes and facial expressions that were simply hilarious. Refreshing to see a good movie after what hollywood has been putting out for the past oh I dunno, 15 years! Recommended to anyone who likes good movies, and doesn’t mind subtitles (or knows French).

Next was Sunday. Didn’t do too much today except for watch some tv and take a couple pictures of the frozen over lake. Which as I promised with my last posting about the lake I would show you guys. So, here are the pictures of the lake in the winter time. It was a super nice weekend, like 5 degrees, so snow was melting, birds were chirping. Very nice! 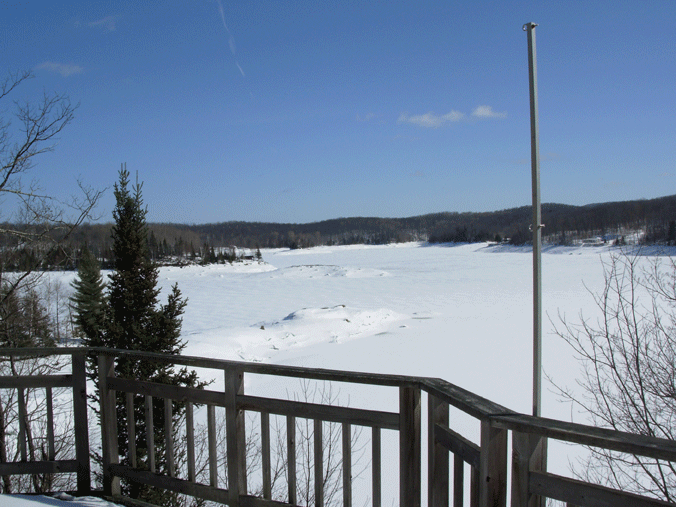 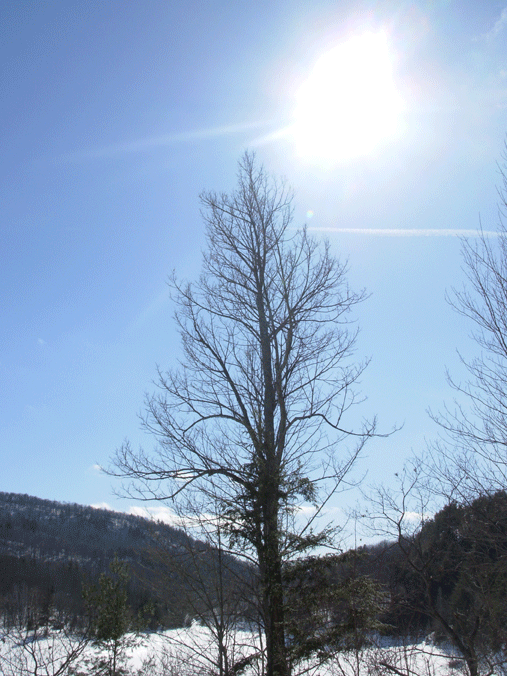 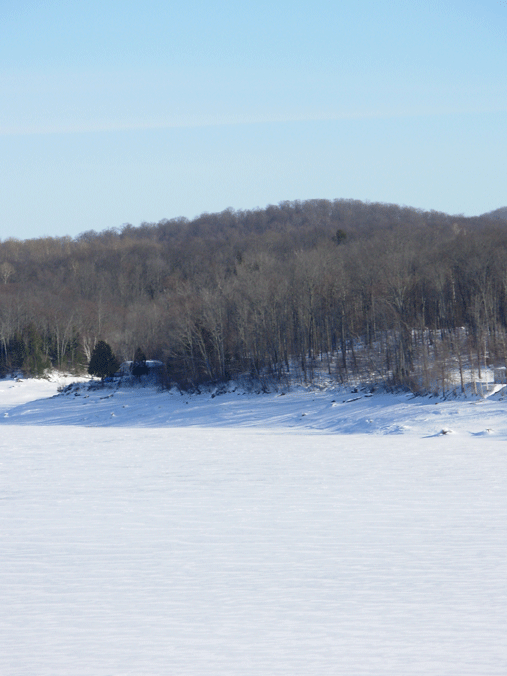 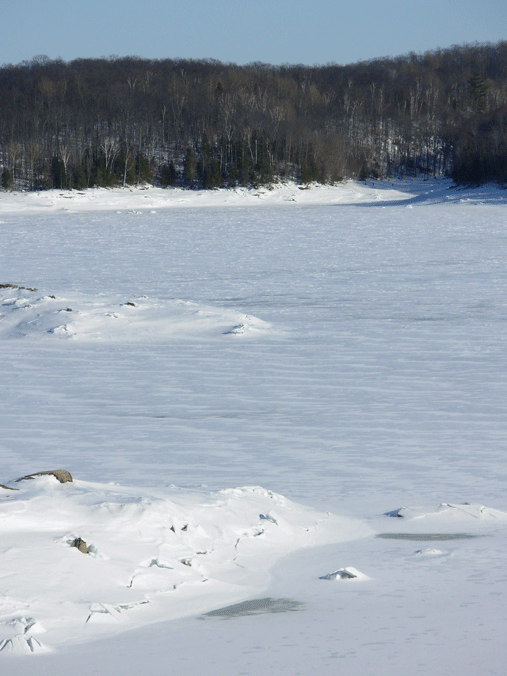 Anyhow, after we took the pictures, had a quick bite to eat and a few cigarettes with my mom it was time to leave and head back home to Ottawa. We got into the car and headed towards town.

Just as we were leaving Lac Ste. Marie we saw this big ass silver flash, and then like a cloud of snow go about 40 feet into the air. We were thinking it was some crazy skidoo guys doing some tricks or something but as soon as we rounded the bend we saw an overturned dodge truck and another car stopping. Wow! Never actually witnessed an accident happen infront of my eyes. So, I quickly pulled the car over to the side of the road and ran back to the truck with my cellphone to see if the person driving was alright. I guess adrenaline took over or something because the guy was able to get out of his overturned truck, and walk around for a few moments. I was standing there with a lady and her husband (who barely spoke english) but gave them my cell phone to call the local authorities to come help us out. Then another car pulled up and the lady jumped out and announced she was a nurse. She came running over and asked the man if he was alright and immediately noticed the smell of alcohol coming off of him and told us about it. So we got back on the phone and also informed the police of the situation since it’s now a DUI case for them. Anyhow the man got all dizzy and complained of neck pain so the nurse helped him sit down and we waited for the ambulance and police to arrive. Then two more cars stopped and the guys jumped out and brought over some blankets etc. Then they announced to us that they were ski patrol at the local ski hill. Must have been this guys lucky day. First a nurse, then 4 ski patrol guys are there to help him. Once he realized that we had called police and ambulance he was almost getting violent trying to leave, but because of his injuries everyone helped to hold him down and make sure his neck wasn’t worse than he thought it was etc. Anyhow, about 45 minutes later the ambulance and cops arrived and he was whisked away to the local hospital for treatment. What a day I tell you. I’ve never been a witness to an accident and help save someone. But it must really be a pisser to people like that nurse and the ambulance technicians when it’s a drunk driver. I mean, sure he’s still a human being and all, but it doesn’t take someone to be very smart to realize YOU DO NOT DRINK AND DRIVE. I feel sorry for the guy’s family (who luckily were not with him), but I still have absolutely no sympathy for him. So all in all, he seemed like he was going to be okay, besides the DUI charge, losing his license, points off his record, and criminal charge. 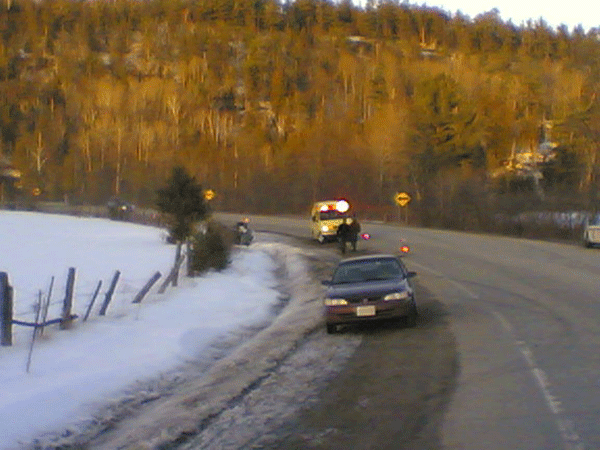 The sad part is, I’m more than positive that we will see him this summer biking around town with a case of beer on the handlebars, still not having learned his lesson.

So that was my weekend, how was yours?

My weekend was good, I spent it with you. WEEEEEE!